Paper is always made from natural materials, meaning it is biodegradable and recyclable, but there are processes that make a difference. When we buy paper made from responsibly managed forests, with a certified value chain (from planting the tree to the store shelf), we’re making the right choice. But as consumers, how can we know where the paper we buy comes from? By reading the label. Learn how. 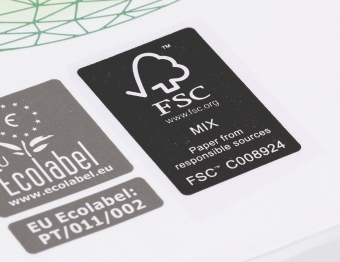 The FSC seal guarantees that the materials and products displaying it are sourced from responsibly managed forests. The FSC is world’s most widely recognised certification scheme, set up in 1993 by representatives of environmental pressure groups, the logging industry and forestry associations. It issues three types of certificates: Forest Management (for forest landowners or managers), Chain of Custody (for manufacturers, processors and traders in forestry products) and Controlled Wood (for organisations and companies). This ensures control over the various phases of production, as products progress along the value chain.

Programme for the Endorsement of Forest Certification (PEFC™) 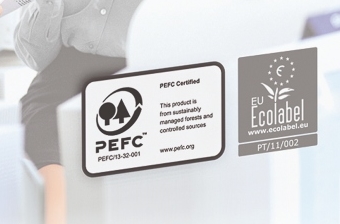 The PEFC™ seal guarantees compliance with a series of sustainability principles and standards for woodlands and forestry management. Certified operators must adopt good practices that ensure that wood and other forestry products are produced to the highest ethical, ecological and social standards. It was established in 1997/98 by forestry producers and industrial operators from 17 European countries concerned about the sustainable development of woodlands. This international non-governmental platform is currently the largest forestry certification scheme in the world (60% of all certified forests). 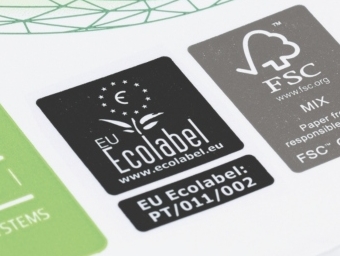 The EU ecolabel was introduced in 1992, as part of the European Union’s strategy for sustainable production and consumption. It promotes products and services that meet strict standards of environmental performance, protecting not only ecosystems, but also consumers. In the paper industry, this label requires the products to use certified and controlled origin wood and prohibits the use of substances harmful to the environment and to health. It also promotes the use of renewable energy, implementation of a strict waste management system and reduction of greenhouse gas emissions.

A story going back 40 years

Certification seals serve to give consumers immediate, objective and accurate information on the environmental impact of a given product, but over around forty years they have also provided encouragement for manufacturers to meet the highest production standards.

The first ecolabel, the Blue Angel, was introduced in Germany in 1978. This was followed eleven years later by the Swan Label in Scandinavia (today the Nordic Swan Label), the first multinational ecolabel system. The rapid profusion of labels in almost all OECD countries led to the adoption in 1992 of the EU ecolabel, using a flower symbol with the stars of the European Union, concentrating environmental policy in a single organisation. 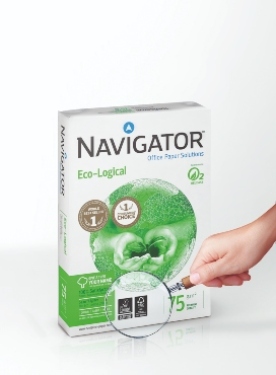 Outside Europe, ecolabels spread around the world in the final decade of the twentieth century and today the FSC and PEFC™ play a fundamental role in certifying the sustainability of forests and products using raw materials from these ecosystems. The two schemes have already certified more than 420 million hectares of woodlands around the world, and timber from FSC and PEFC™ certified forests corresponds to 38% of global output of wood for industrial purposes (689 million cubic metres, according to 2016 figures).

Competition between the two schemes (FSC and PEFC™) prevents them from being used together on the same products, but both are well established in forests managed by the paper industry, as in The Navigator Company’s woodlands in Portugal. The Company has been certified under both schemes since late 2006 and today uses the FSC label on its own brands, and reserves the PEFC™ label for its clients’ brands. The Ecolabel has been used on Navigator’s products since late 2010.

All the wood/fibre used at the company’s mills is controlled origin, and 54% is certified, meaning it pays a higher price at the factory gate. “The FSC and PEFC™ certification on products means they can be easily recognised by consumers as symbols of forestry conservation,” explained Pedro Filipe Silva, Sustainability Manager at Navigator, who added: “Without the environmental labels, we wouldn’t be able to sell paper in our main markets.”