“Water never flows twice under the same bridge”. The saying dates back to antiquity, but the pulp and paper industry is proving it wrong: the sector is a leading investor in reusing water. New technology has led to unprecedented reductions in consumption, and our goals are even more ambitious.

Water is everywhere in a pulp and paper mill. It is used at practically every stage of production, from developing the bonds between cellulose fibres that give paper its strength, to cooling and cleaning the equipment. This is a familiar feature of any plant of this type, but what is less well known is that the quantity of water retained in the end product is just a small fraction of the water used, and so investment in more efficient technology and techniques for reusing water have drastically cut consumption. Projects under way at The Navigator Company’s plants aim to reduce specific consumption of water by 15 to 20% by 2025.

For several years the pulp and paper industry has been developing sustainable responses to water consumption, thanks to a virtuous cycle with a strong technological component. Water is recycled and reused at different stages in the production process, thanks to innovations that can be introduced in existing facilities in the sector and which sometimes go beyond the increasingly strict requirements of environmental regulations, as reported in the 2018 Forest Products Sector Guide to the Natural Capital Protocol, published by the World Business Council of Sustainable Development (WBCSD).

“Compared with the production process in the twentieth century, water consumption has been reduced considerably through heavy investment in technological progress, making it possible to optimise the process, by fitting new equipment which is more efficient. In the past thirty years, we have cut specific water consumption at our mills by around 70%,” explained Carlos Quadros, from the Technical Environmental Unit, which is part of Navigator’s Environment and Energy Department (DAE).

Navigator’s specific consumption, in other words, the quantity of water needed to produce one unit of output (m3 per ton of pulp or paper), stands today at a combined figure of 21.4 m3/t, down from around 100 m3/t three decades ago.

“This has been achieved primarily by using water on a counter-current or cascade basis, in other words by using better quality water for more difficult washing purposes, and then reusing it at an earlier stage in the washing process, in equipment arranged in a series. This is called counter-current washing”, explained Luís Machado, Technological Consultancy Coordinator at RAIZ, Navigator’s forestry and paper research institute.

But it’s not just the method that helps make the process sustainable. More efficient equipment (showers, seals, pumps, etc.), elimination and/or reduction of consumption at certain stages (for example, debarking is now a dry process) and concentration of almost all the water at a single entry point, followed by recovery and recirculation in the production process, are examples of how the industry has sought to establish a good relationship with this natural resource.

“In paper production, around 90% of the water recirculates in the machine itself, diluting fibres, separating them through draining, purifying them and the recovering them, in order to repeat these operations and the washing processes needed,” added Luís Machado. Other stages, such as cooling the equipment, also consume water. But the use of closed cooling circuits means the water is recovered in a tower which returns it to the system at a lower temperature, thereby reducing the quantity of new water needed.

“The less water we consume, the less pressure there will be on the places where we obtain water and the better prepared we will be for extreme issues caused by climate change. This is why RAIZ has been supporting several task forces at Navigator’s plants, in order to identify opportunities for reducing water consumption and recovering as much as possible of the water being used,” Luís Machado continued. “In Setúbal, where it all started in February 2017, 42 potential reduction measures have been identified. And implementation of just a few solutions has resulted in a reduction of 6.5% in relation to the reference year,” he stressed.

Upstream, the Company has also been looking at the reliability of its supplies. Examples of this concern are the weir that is built every year to prevent saline intrusion into the Rio Novo do Príncipe (a section of the River Vouga), a public service that also benefits farming on the lower Vouga, and the careful management of 23 licensed bore holes in Setúbal, subject to regular maintenance and assessment of their hydrodynamic and hydrostatic levels.

Significant progress has also been made in sustainable water use and the company has set more ambitious targets in line with the industry’s sense of environmental responsibility. “Projects currently under way at the Company’s mills are intended to cut specific water consumption by 15 to 20% by 2025,” added Carlos Quadros. The progress made, for example, in effluent treatment, has made a major contribution.

Navigator’s industrial units have waste water treatment plants (WWTPs) with three distinct phases of treatment: primary (removal of solids), secondary (biological treatment of organic load) and sludge treatment, complying with the strict legislation on discharges into the environment. At each industrial complex, the DAE has two on-site technicians whose responsibility is to assess the legal requirements established in the legislation and to ensure that our operations comply and that we achieve our environmental targets. 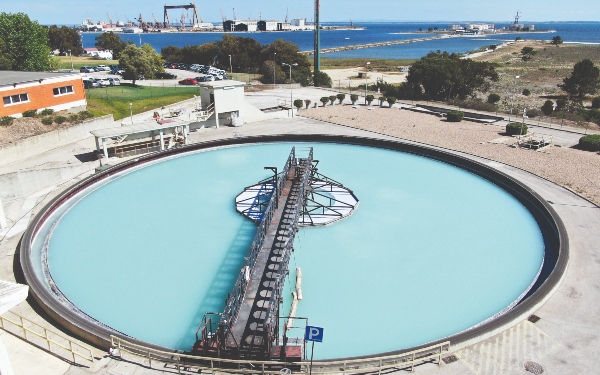 Eucalyptus globulus, the primary raw material for producing pulp and paper in Portugal, has an important impact on water issues. Because delignification (the process of removing lignin from wood fibres) is easier, small quantities of chemicals are used in cooking and bleaching, resulting in a smaller volume of effluents for recirculation or treatment.

Given that industrial processes are constantly evolving, what can we expect in future in relation to sustainable water use? “Cutting water consumption will be a constant focus as we invest in technology and in looking for alternative supplies, such as treating and reusing effluents and even desalination of sea water,” explained Carlos Quadros.

“Projects currently under way at the Company’s mills are intended to cut specific water consumption by 15 to 20% by 2025.” – Carlos Quadros, Technical Environmental Unit, DAE

“The less water we consume, the less pressure there will be on the places where we obtain water and the better prepared we will be for extreme issues caused by climate change.” – Luís Machado, Technological Consultancy Coordinator, RAIZ.

Under a cooperation agreement signed last year with the Science and Technology Faculty (FCT) of Universidade Nova de Lisboa, The Navigator Company is seeking to assess the potential for reclaiming treated effluents. A report has already been issued on the WWTP at the industrial unit in Vila Velha de Ródão. “We’re now working in Setúbal and will then move on to Figueira da Foz,” we heard from António Mano, assistant lecturer at the Department of Environment Sciences and Engineering. He told us what the work consists of: “We assess the quality of the treated water, the treatment processes used for these effluents and what can be added to achieve better quality, potentially compatible with other uses.”

An innovative project in Setúbal 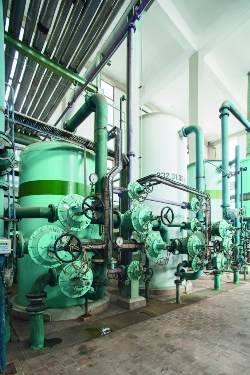 An innovative project at one of the waste water plants on the Setúbal site is reclaiming effluent for reuse in the production process, opening the way to further reductions in fresh water intake.

“Over six months, a pilot facility treated effluent from the NPS paper mill using ultrafiltration (membranes with tiny pores for additional filtration of the treated water at the end of the process) and removal of salts accumulating in the process (chlorides, calcium, etc.), by means of reverse osmosis, resulting in water with the same general quality of the fresh water we obtain”, we heard from Luís Machado, of RAIZ, who drew attention to the work on this project by two companies, Osminergia and Aquaservice.

“In future we can use this water (around 75% of the effluent currently discharged) for the same purposes that we currently use fresh water,” he added. Suffice it for the technology available not to represent an unaffordable cost when applied across operations as a whole.