Science fiction has already come true in the use of forest biomass as a raw material for other industries. In the laboratories at RAIZ and partner universities, experiments have shown that it’s possible to replace petrochemical products with other more sustainable products, including by using waste from the pulp and paper industry.

Cellulose test tubes are everywhere. Fourth year students in Materials Engineering and Micro and Nanotechnologies Engineering are busy weighing, dissolving and mixing. The class is in Cellulose Materials and Paper and they’re learning to make the inks created exclusively in this laboratory belonging to CENIMAT|i3N, at the Faculty of Science and Technology at Universidade Nova, for printing electronic circuits on paper.

Over there is the screen printing machine, where these special conductor and semiconductor inks, made from carbon and zinc oxide, with nanoparticles, are printed onto a sheet to construct paper transistors. An alternative – cheaper, lighter, more sustainable, biodegradable and flexible – to conventional electronics, which in 2008 was reported in newspapers around the world and won an award for Elvira Fortunato, currently the Centre’s director.

Working with The Navigator Company was a long time wish of this researcher. “We know what we want, but we don’t produce paper, we add value to paper,” explained Elvira Fortunato. So CENIMAT|i3N and RAIZ, Navigator’s forest and paper research institute, submitted a joint bid to the Portugal 2020 programme, to create a cellulose matrix with the right characteristics for printing a biosensor that would incorporate two technologies: paper transistors and microfluidics.

Researchers at the university labs developed the printing techniques, made possible on domestic laser and inkjet printers, for spreading wax and electronics on paper, a project carried out using one of the five ERC (European Research Council) bursaries that the group has already been awarded. This project, coordinated by Luís Pereira, sets out to develop new functions for cellulose fibres and to incorporate them in devices such as transistors and sensors. The requirements for creating the ideal paper were transmitted to RAIZ: it should be as pure as possible, without additives that might influence the analysis results.

The project is about more than just a disposable biosensor that functions by changing colour. The electronics it incorporates enables it to send a reading to a device, where it is analysed and stored. One day, you could use any computer, or even a smartphone app, to take a reading of your cholesterol levels, or to detect whether the expensive wine you bought is a fake.

“It’s not fiction, it’s reality,” Elvira Fortunato assured us. The applications of these electronics are countless and chime with the urgent need to replace plastic with paper.

Potential of biomass in RAIZ research

At RAIZ, the laboratories are also buzzing with projects concerning new uses for biomass. “In the pulp and paper industry, despite our high industrial standards, we’re still looking for applications that add value to a smaller fraction of waste generated. From the perspective of the Circular Economy, our aim is to reuse them as raw materials for other industries,” said Paula Pinto, Technology R&D Coordinator.

In reality, “the bioeconomy is looking for routes which are alternatives to the petrochemicals industry, and it’s possible to do this with products such as cellulose, hemicellulose and lignin,” explained Alexandre Gaspar, in charge of several of these projects. And that’s the work being done at RAIZ. 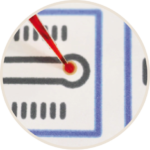 Paper biosensors
Special paper has been created to combine two technologies: microfluidics and printing of electronic circuits. The concept test is for pH analysis, but the biosensors can also be used for quick diagnoses in medical applications, for more complex analysis of bacteria in water, or in smart packaging. 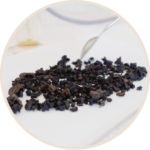 Biochar
Biological sludge, left over from secondary treatment of industrial effluents, undergo pyrolysis (treatment by heat of up to 600o C) to produce this kind of biochar that is used as an additive in fertilisers, to release carbon and other nutrients in a controlled way. Researchers at the University of Aveiro are assessing the effect of weather and temperature on the constitution of biochar and RAIZ is responsible for controlling the raw material to validate the feasibility of the project. 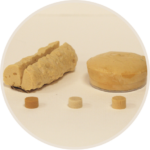 Polyurethane foams
It has been proven that lignin from industrial black liquor can be used as a raw material in producing polyurethanes, which have structural characteristics suited, for example, to thermal and acoustic insulation. The experiment made it possible to assess percentages of lignin to determine how far it is possible to substitute components from non-renewable sources without sacrificing the ideal characteristics of the foams. 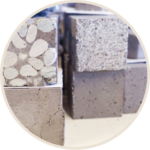 Geopolymers
From fly-ash captured in the filters of biomass boilers, it has been found to be possible to produce non-structural construction materials, which can be used, for instance, to produce kerbstones and other claddings for public spaces. Geopolymers were also tested as pH buffering materials or as adsorvents in water treatment systems. 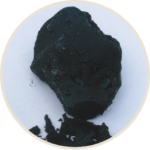 Asphalt materials
Another demonstration project involving the use of dregs and grits (industrial waste not currently reclaimed) for producing road pavings, substituting materials currently extracted from quarries. As part of this project, the partners plan to build 300 metres of paving (which will be tested for durability and mechanical strength) and pre-cast doorways using ecological mortar, incorporating another waste product: calcium carbonate sludges. 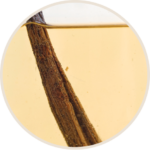 Vanillin and aromatic compounds
One of the main artificial aroma compounds is vanillin, produced from a petrochemical source.
But there’s another way: making it from a component of wood, lignin, which is separated from cellulose during the cooking process, in the form of black liquor. The mixture produced from lignin is also something already used for artificially ageing spirits. 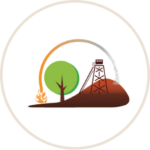 Life No_Waste
Another important use for ash and for biological sludges is in remediating degraded mining soils. This mixture helps to balance the soil’s pH and supplies organic matter with nutrients. Trials carried out at the University of Aveiro have been successful, with plants growing in the treated soils, and the pilot project is already under way at the São Domingos mines, where plots have been selected to pilot the use of this material. 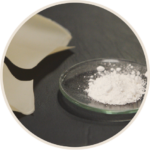 Bioproducts and bioplastics
Bioproducts are anything we consume in our daily lives produced from forestry and farming biomass. Lactic acid produced from biomass sugars is the basis for producing PLA bioplastics and there is also the succinic acid (used in plastifiers, in the food sector, health and hygiene products, additives for pains, glues and varnishes), which can also be produced with biomass. 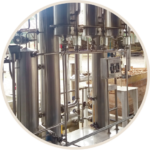 Biofuels
For several years, Navigator has been testing the production of second-generation bioethanol, i.e. not consuming resources which can be used for food production. The first approach was to extract sugars from wood chips. This was followed by using primary sludges from its mills and then a project that used different forestry biomass materials available in Portugal.

Application: As from 2021, the EU will require incorporation of advanced biofuels derived from cellulose in petrochemical fuels
Co-promoters: LNEG – National Energy and Geology Laboratory; Un. Coimbra 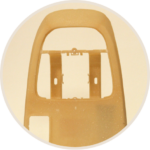 Biocomposites
The application of this mixture of natural fibres with plastics has been developed furthest in the aeronautical and automobile industry (dashboards in vehicles and aircraft), although it is also used in everyday articles, such as kitchen utensils or loudspeakers. After years of R&D, the project is advancing towards industrialization in the injection machines sector and 3-D printing. 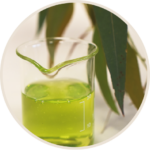 Essential oils
Portugal was once the European leader in eucalyptus essential oils but was overtaken by China. With the recent mechanisation of biomass harvesting in forests and a number of synergies in pulp mills, the country may be able to win back lost ground. These oils, extracted from the leaves, are used in pharmaceutical products, in cosmetics and perfumes, in antiseptics, disinfectants and air fresheners.